boardgames design game theory matrix oddments by Tom Jolly | on September 29, 2014 | 11 comments | in Technical | Like it

Game theory is an interesting beast. Supposedly you can use it to solve any situation where intelligent people, given a number of strategies or decisions to make, can optimize their decisions for the best “payout”. Roger Myerson (Game Theory: Analysis of Conflict) defines it as “the study of mathematical models of conflict and cooperation between intelligent rational decision-makers.” Conventionally, game theory takes a game situation, boils it down into a matrix of possible decisions and payouts for each player, and thus determines the overall payout for the game and which player it favors.

I recently read The Compleat Strategyst by J.D. Williams, a primer in game theory, where the author spent the whole book solving a variety of sociological games, things like the “The Prisoner’s Dilemma” and the “Dollar Auction”, both famous examples of game theory applied to decision making in social situations (not games in the sense of board or card games). There is a long list of games in game theory at Wikipedia that’s worth perusing. But it should be pretty obvious to the casual game designer that solving an existing game, while interesting, isn’t as useful to us as taking a game theory matrix and creating a game from it. Working backwards, so to speak.

First, you might want to understand the nuances of a game theory matrix in its simplest form; a two strategy game for two players. Let’s say Bob tells Alice, “Hey, let’s make a little bet; we’ll shout out numbers at the same time. If they are both even, I’ll pay you $3. If I get even and you get odd, you pay me $4. If I get odd and you get even, you pay me $5, and if we name odd numbers, I pay you $6.”

Well…that sounds fair, doesn’t it? If they were flipping coins, this would be a fair game. But the key is, the players get to make a decision. The matrix for this looks like this;

Note that in this matrix, a negative number is bad for Bob, but good for Alice.

A simple calculation (which is much more complicated for 3-strategy games) can give you the best odds for each player; that is, the best row or column to use in what ratio. Subtract the numbers in the vertical columns to get (-$8) and ($10), swap these numbers, discard the minus signs, and put them at the bottom of each column. Subtract the numbers in the rows for (-$7) and ($11), toss out the minus sign, swap them and put them at the end of each row. This produces the following picture;

The numbers at the ends of the rows and columns are called “oddments”. They are the best odds to use for Alice or Bob given either pure strategy by the opponent. Given an intelligent opponent, this is the best a player can hope for. In this case, to calculate the “payout” for Alice (keeping in mind that negative numbers are good for Alice, positive are good for Bob), you multiply the oddment 11 x (-$3), then add that to 7 x $5, and divide this total by 18, the sum of the oddments. Yeah, I know, this hurts your brain. So; (-33+35)/18, or 2/18, or 1/9. What does this mean? Remember, negative numbers are good for Alice, and positive results are bad. Alice, with the best possible strategy she can choose, is going to lose $2 every 18 games, if Bob (who proposed the game – what a con artist) doesn’t screw up. The best case for Bob, if he knows what he’s about, will be a gain of $2 for every 18 games he plays.

Okay, this was supposed to be a simple example. Remember my goal here was to take a simple game matrix and not solve a game, but create a game.

Let’s look at another example, and see how we can balance it, then work backward from it. Alice has three choices, cards A, B, and C. Bob can choose cards (or board spaces) D, E, and F. Based on their choices, the pair of cards they select might create food, gold, or meeples, and each player has weighted these with estimated values of 1, 4, and 5, respectively, based on end-game scoring bonus points. If Alice chooses card A (or space A on the board) while Bob chooses D, then Alice gets a meeple and Bob gets a Food. Keeping with the convention that positive numbers are good for Bob (he gets paid) but bad for Alice (she’s doing the paying), and negative numbers are vice-versa, then this net result (Alice-A and Bob-D) would result in a matrix value of -4 points, which would be in Alice’s favor. There are a variety of things that can happen, but let’s say the final matrix of choices looks like this;

I already wrote the oddments in to save space later on; I won’t go into how to arrive at the odds on a 3×3, because it would take a couple of pages to explain it. If you want to know, go read “The Compleat Strategyst”. If you’ve solved determinants in school, you might have a good idea.

Getting back to the example, that “-4” in the upper left corner of the matrix means that Alice got a meeple (5 pts) and Bob got a food token (1 pt). The net gain is for Alice, shown with a negative number. If Alice plays a B-card while Bob plays a D-card, then she gets a Meeple (5 pts) and Bob gets 1 Gold and a 2 Food (6 pts). A bit better for Bob, with 1 point for him. Bob sees that if he plays an F, and Alice plays a B, he can score 1 meeple while she only gets 2 food, for gain of 3 points for him. And so on. We can’t really tell from the matrix above if the game is balanced (which may not be critical if the cards are shuffled and dealt, but it would be nice if there weren’t runaway advantages for any player). So let’s find out if it is balanced.

At the ends of the rows and columns are the odds, or oddments. For a “best game”, these are the ratios each player wants to use to optimize their own profits (or minimize their losses in an unfair game).

As you can see, the strategic choices are not very obvious for Alice and Bob. Even though whenever he chooses D, the best result is a payoff of “1”, his best strategy means picking D twenty-six times out of 101 (26+28+47) or about 1/4th of the time. We can’t tell easily if the game is biased toward Alice or Bob. More math!!

Easy-peasy! Bob loses money on this game. Checking it against Alice’s best strategy;

Every 101 turns, Alice can gain a whole point! Assuming she plays perfectly.

While not a perfectly balanced game, this is purty danged close. To make it balanced, we’d have to add 1/101th to every element in the matrix. In board game turns, that’s insignificant.

Applying this to an actual game wouldn’t be terribly difficult. I’ve already given a few clues on how to do that. But the matrix assumes that both players are making a decision at the same time and revealing it at the same time. This often occurs in bidding games, where you are revealing some secret number of tokens when all other players are doing the same thing. So here’s an example of a game design. You have a payout matrix (obscured by your theme, hopefully) and two players each have 3 “vote” cards to play. Some victory-point tiles are laid out to the side where the costs are in meeples, food, and gold. You’ve created them so the relative values are 5, 1, and 4, respectively for those three components. Now players select cards so that the matrix element that comes up, ideally, will give them the resources to buy the maximum number of VP cards. Ah, I see I need a meeple and a gold to buy that card, so I SHOULD play this card, but my opponent will guess that and play his card to maximize his meeple payout, so I should play THIS instead. You get the idea. Huh…I think I’ll go design this game. It sounds like fun. Oh, look, here it is! [note; there were about 2 months between the writing of the last two sentences]

I changed the values a bit; green cube is 1, blue is 2, yellow is 3, and a white meeple is 5. The game has the same payout as the one above. Having played this version a couple of times now, I’d probably make the payouts on some of the spaces smaller; maybe even go for a symmetry along the diagonal for a balanced payout. 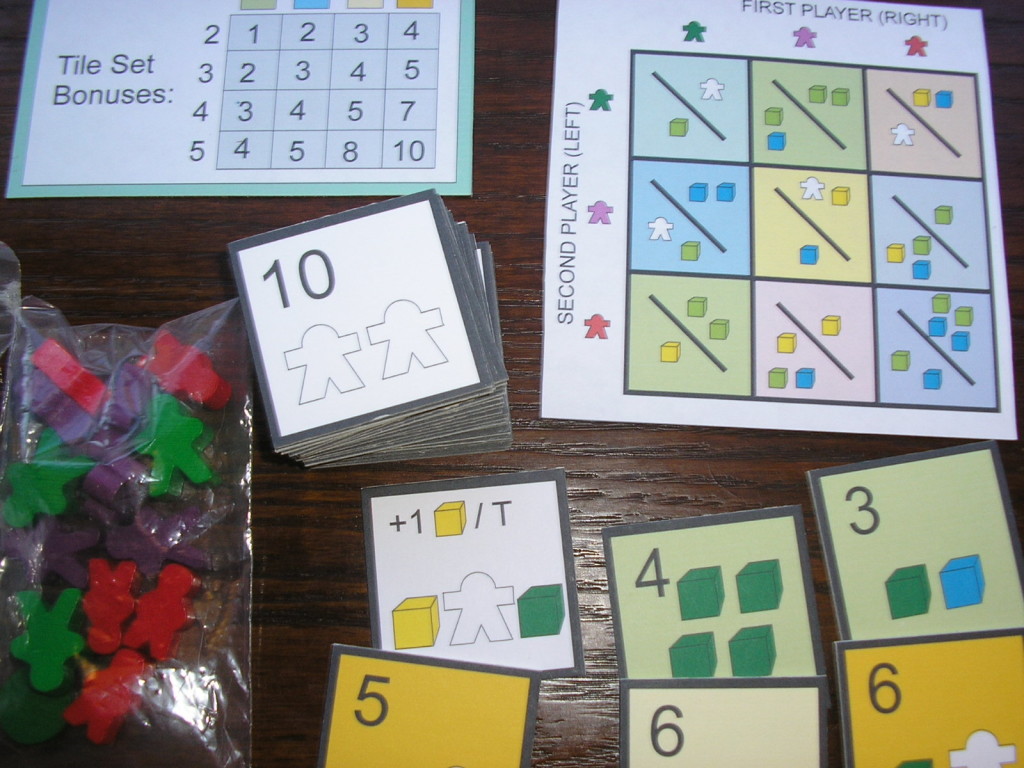 A game-creation game-theory matrix needs some tweaking when applied to worker placement, where one player’s action removes that option from other players. Each spot in the matrix represents the whole sequence of moves for the players’ turns. Players A, B, and C make their moves, add up the payouts, and you fill in the space on the matrix with that one number. If there are four choices on the board, then the matrix becomes bigger (and calculating odds is much, much harder in 4 strategy games or larger; the “general solution” for games with 4 or more strategies takes a whole chapter in the aforementioned book). Sometimes the payouts are just estimates on the “value” of doing something (as in social game-theory; if I do such-and-such, what are the odds my wife will kiss me or punch me? What’s the numeric value for this?). Board games tend to be fairly complex, in part to dress up the mathematical undergarments with fancy clothes. This makes them harder to model or analyze, and also makes it more difficult to go from matrix to game.

Imagine in the worker-placement example, where each number in the matrix represents a complete sequence of WP placements with weighted values. Working backwards from the matrix, each number has to represent the sum of payouts to the players for that round. The next number in the matrix, representing either a different play order or different selection of spaces, will have to be split up in such a way that the same game elements yield a different number. Thus, the game elements have to be juggled and selected in such a way that they will produce all the different elements of the balanced matrix based on the choices of the players. An exercise that I will leave to the reader; I’m sure your brain is full by now. I wanted to give you a taste of game theory, not choke you to death with it.

I also wanted to answer the question, for myself, if you can start with a game theory matrix and work backward to create game rules from it, or at least add it to the bag of tools for the game creation process. I think that answer is “yes”.