Ever wonder what a game designer does behind the scenes? I thought it would be fun to share what kind of stuff I wrestle with when I’m up to my elbows in grease.

One of the four titles I’ve been working on last month is Hundred Kings War. It’s a 2-5 player strategy game that feels sort of like a streamlined Game of Thrones. We’re starting to move forward on development and art, and I’m hoping to have it ready for a Kickstarter this fall.

The playtests still continue to be really fun. The only rough edge I’ve found is an occasional end-game scenario where there is one player who has no chance of winning and ceases having fun. These tests are far outnumbered by the games where there’s a tense, epic, last-turn armageddon. It seems to be a timing issue, rather than a consistent flaw. But those edge cases bother me, and I want to fix them.

The raw mechanics are: each player starts with 30 VP. At the end of every turn, all players lose VP depending on their board control of certain scoring areas. Partially-hidden random card draws at the beginning of each turn determine which scoring areas are checked at the end of the turn. Zero VP players continue to play. It ends up being a 3-4 turn game, and each scoring card shows up one or two times.

There are two ways to win:

In an evenly matched game, the endings are always tense, and theres always a sense that you can grab the win. Most games ended up with a couple of players pushing for an Emperor win, with a couple more players trying to disrupt things and grab a Usurper win. But we had enough cases where a player would clearly be out of the running by the end of the third turn, and have to sit through the fourth turn as a spoiler. Those cases sucked.

The first attempt at a fix was an Accelerated Ending. Basically: when a player who is “zeroed out” loses VP, that loss is applied to all other non-zero players.

This cut down on but did not completely eliminate the fourth turn spoiler scenario. Sometimes the extra penalty was enough to cause an Emperor win where there wouldn’t have been one before. But if the VP leaders were close, it didn’t.

I’ve come up with one more (untested) set of changes, that I think might do the trick. I might not even need the extra zeroed-out penalty. The idea is:

Restrict the game to three-turns only. If there is no Emperor at the end of the third turn, determine the Usurper win. Four turn games aren’t always bad, but I don’t think we lose anything by getting rid of them.

Alter the scoring card lifecycle. This is kind of hard to explain, so I’ll use pictures.

Currently there are nine scoring cards. Every turn, two are played face up, and two are played face down. Each player gets to peek at a random face down card. Because 4 cards per turn doesn’t divide evenly into 9 cards in the deck, you end up with some interesting overlap:

In a three-turn game, there’s significant luck involved in that third turn. Board control is cumulative from turn to turn, so if you happened to invest in the spaces that are part of the scoring card that got drawn, you had an advantage over the person who had invested in the spaces on the scoring cards that never got played.

With a fixed number of turns, I want to change the scoring card lifecycle so that every card gets triggered the same number of times. In this case, the last turn’s scoring cards will all be known by process of elimination, so they might as well be face up. A few examples: 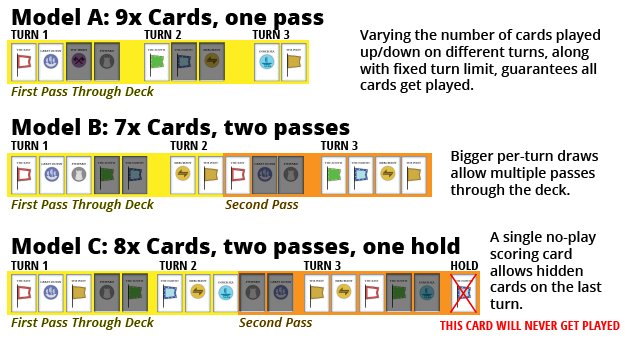 As you can see from just these three example models, there are several dials to turn, and several ways to have a fixed-turn game structure that gets rid of the original scoring problems. I’m going to try some of these and see what happens.

Thoughts? Any other ideas for attempted fixes for this? Let me know!