The Game That Won’t Get Published 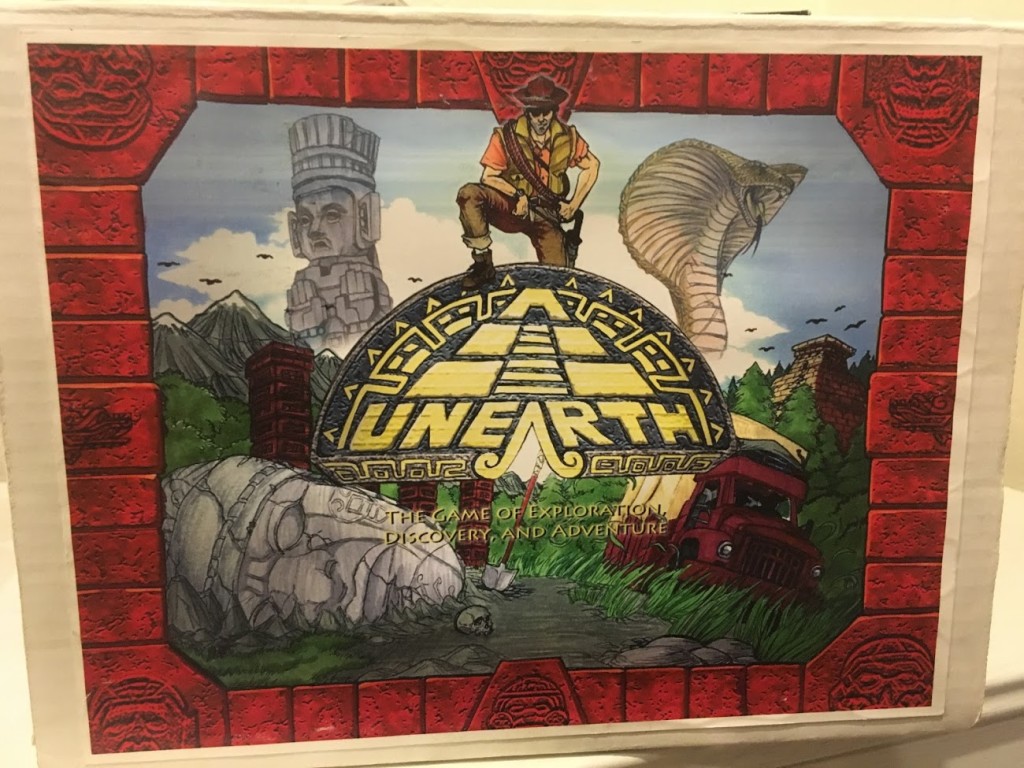 I can still remember the exhilaration of hearing my game, Unearth, announced as the winner of the KublaCon Game Design Contest in May 2006. All of the contestants and our friends were sitting in a small conference room overlooking the massive atrium at the Hyatt hotel in Burlingame. The judges had placed all of the entries on the main table and were going through the games one by one, announcing them in reverse order. When it got down to two games remaining, it seemed inconceivable that I, an amateur, could actually win this contest. After all, Unearth was my first board game I had designed and I had just started wading into the board game hobby. Still, my first effort had won over my friends and family who loved Unearth, and I had made the classic rookie mistake of paying an artist to make artwork for my game. The vibrant artwork embodying the classic “Indiana Jones” theme definitely added another layer of charm.

It’s not for a lack of trying. By my estimates, I have submitted Unearth for publication at least eight times to literally every board game company that accepts outside submissions, places like Asmodee, Eagle Gryphon Games, and Bucephalus Games (who published my first game, Kachina). I recall sitting down for a play session with the guys at Slugfest Games (of Red Dragon Inn fame), who were a fun group fast with jokes, but they literally picked my game apart.

I think my best chance was with ZMan Games, where Zev Shlasinger said he liked the game. He also had another submission on hand, Archaeology, a small box card game. He was trying to choose which archaeological themed game to publish. In the end, he decided to go with Archaelogy.

It’s not like I didn’t keep trying to improve my game over the years. Game play involves driving your trucks to various archaeological sites where you try to get past certain obstacles by playing cards from your hand. If you manage to get through all of the obstacles, you gain a treasure card. The original mechanism to add more archaeological sites was to play a Discovery card from your hand. Over time, I realized this was a bad idea as folks could prevent the game from ending by holding onto their Discovery cards. So, I moved the Discovery cards into the Obstacle deck which seemed to work well. I added new kinds of tools that rounded out the tool deck. My “beer and pretzels” game got less random and more strategic. Still, the changes didn’t seem to be enough.

I hit rock bottom when I entered Unearth into a national Rio Grande Game Design Contest in 2009. The winners of 14 regional contests would earn the right to pitch their game to the founder of Rio Grande Games, Jay Tummelson, at the Chicago Toy Fair. This seemed like a great opportunity. My regional contest was at a game store in Berkeley, and the place was packed with designers, probably 12-15 contestants. The winner would be based on scores from playtesters. As the day went on, crowds of people went through my table, playing Unearth. Some folks frowned at my game as too random and not elegant enough, but others seemed to have a good time. When they announced the winning game, I still believed I had a chance. Unlike my magical afternoon many years ago where my game was called in first place, Unearth was announced as the last place game! Ouch!

From what I have heard from other game designers, everyone seems to have one or more games in their closets that just won’t get published.

These might be our first designed games, or games we and others love, but their destiny seems to be to collect dust in the dark. If I try to look objectively at Unearth, I can see that it lacks what publishers would call “a hook”, that one new mechanism or idea that grabs attention. Also, Unearth has an inordinate amount of randomness. Players draw random cards to try to solve random obstacles in order to win random treasures. It’s a game that might have been good back in 2006, but now in 2016, it feels like a dinosaur, a type of game publishers don’t publish anymore and players have moved on from. 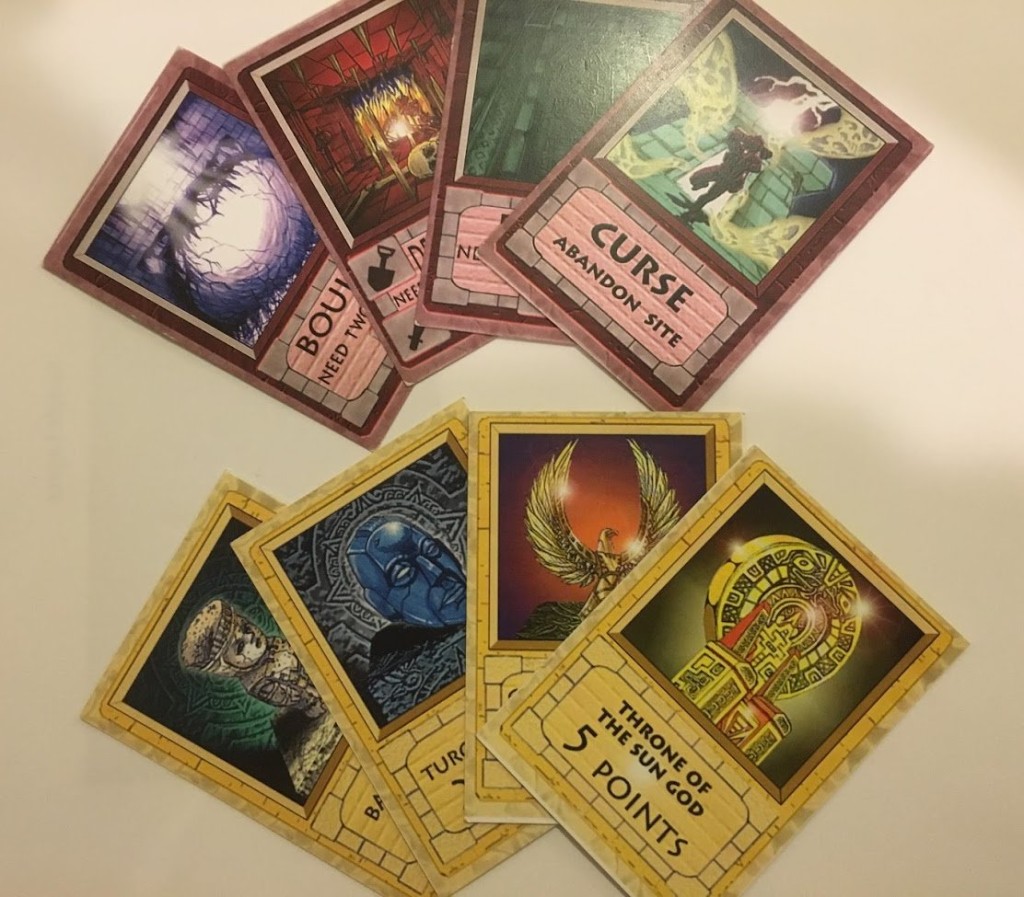 I have found many parallels in the trials and tribulations of trying to get published whether it’s games or poems, another hobby of mine. Some of my favorite articles about the path to publication are from Poets & Writers magazine. Every month, they feature a different writer sharing their story of success or failure. One such article was “A Short History of Everything” by Peter Selgin (Poets & Writers, Sept Oct 2007, pages 27-31), who related how he wrote and revised the same novel over twenty years, submitting it to dozens of publishers to no avail. Selgin says:

“You hear the stories. How, before it won the Pulitzer Prize, [a manuscript] was rejected by thirteen publishers, including the house that eventually published it…In fact, these are among the very few such tales, rare exceptions to the unwritten law stating that when a book gets rejected, it stays that way.”

The article does not end with triumph, rather: “Were this a successful essay, with a satisfying conclusion, it would end with my novel accepted and its author succeeding against all odds. But, despite, having been short-listed for several awards, [my book] remains unpublished.” Selgin grapples with whether this is failure or success, or some of both: “There is the victory of endurance, the triumph of tenacity, the prize of persistence…The test of a first-rate intelligence is the ability to hold two opposed ideas in the mind at the same time, and still maintain the ability to function. For me, now, these two ideas are as follows: (1) After many years, countless revisions and dozens of submissions, my novel has failed to find a publisher. (2) It is a success.”

While I wish I had found a publisher for Unearth, I feel pretty lucky overall given I have published other games and even a book of poetry. It’s easy to look at boxes of unpublished prototypes as failures, but really they were stepping stones on the way to better games, my tools of learning to become a better game designer.

One moment from the Rio Grande Game Contest really stuck with me. After the contest had concluded in the game store, another entrant, who did not win, decided to play his game again, just he and his wife, oblivious to the other folks in the room. She obviously loved his game and seemed happy to just be with him to support him. They laughed and smiled as they played cards and progressed through the game. Watching them play, I realized there are many ways to find success as a game designer.

Do you have a story about a game you can’t seem to get published? Please share your story in the comments.