advice AEG Cutthroat Kingdoms Finding a Publisher gencon patience persistence by Guest Author | on August 16, 2016 | 2 comments | in Publishing | Like it

Introduction by Luke Laurie
At the League, we are fortunate that we get the opportunity to interact with so many interesting, creative people – and in many cases, assist them on their journey to become gamemakers. Bryan Merlonghi is one such new designer, a young man whose insatiable thirst for knowledge and indefatigable spirit have helped him get noticed in the crowd.
One year ago, Bryan Merlonghi told his bold tale of bringing his first big design, Cutthroat Kingdoms, to Gencon, on a quest to find a publisher. Now, after a long road and a return to Gencon, he continues his tale… 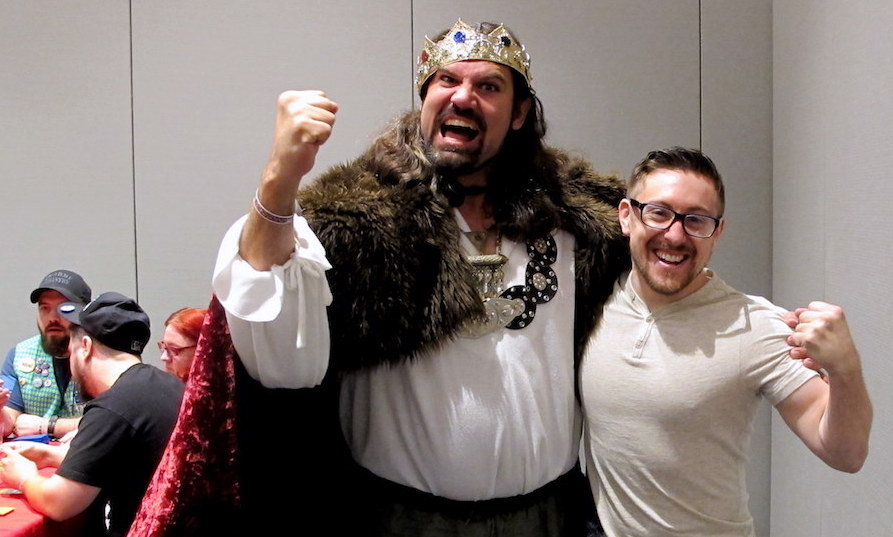 It’s been a year since I took that uncertain flight. A year since my heart and body took to the sky, to Gen Con, to pitch my game at the Publisher Speed-Dating event. A year of overwhelming uncertainty, self-doubt, and dream-haunting fear. With games coming out on Kickstarter by the hundreds every month, and publishers pumping game after game into retailers across the nation, that year was the year I believed, without question, that I couldn’t possibly be noticed, drowning helplessly in a sea of anonymity.

You always think you’re just so creative. But when you’re in the entertainment industry, of any sort, boardgaming included, you magically find yourself surrounded by hungry wolfish creatives just like you, who want it just like you, who have the vision just like you. And then you start to decide that you’re exactly the same as everyone else, you’re not that unique snowflake your mom told you you were, and that you’ll never make a lasting impression on the world, die a pauper in an alleyway with rats chewing on the squishy parts of your eyes.

I didn’t die in an alleyway. And I still have my eyes.

I know you’re probably thinking I did, writing this beyond the grave, that I’m the first actual ghostwriter of all time, because that would be just a hell of a story, but I’m still alive. I’m sorry to crush the horror plotline you had going in your head. And, so far, I haven’t seen a rat yet, at least not rat enough to come gnawing at the giant wheel of cheese that is my mind. What happened, in actuality, in the year following my travel to Gen Con had completely, and forever changed my life.

After Publisher Speed-Dating, I got an enormous outpouring of interest in Cutthroat Kingdoms. CoolMiniOrNot, AEG, ZMan, Atlas Games, you name it. It was incredible, but overwhelming.

Imagine you’re in labor with a baby. If you’re a guy, I promise this will be the closest thing to bearing a child, and if you’re a woman, you think I’m full of it. So you’ve designed your baby, carried your baby for a year, or even years, and it’s going on the 13th hour of the most painful labor you’ve ever been through (it’s your first, so it’s incomparably painful), and out she comes, she grows up, and she’s just been accepted to five of the best Ivy League colleges in the world.

Which publisher do you go with?
Are they going to screw me?
What’s a publishing contract?
Do I even get paid?
Do they, like, pay me?
Wait… you’re kidding me, they’re going to pay me?

It wasn’t all sunshine and rainbows. But I had a unicorn. And he farted rainbows, that smelled like jellybeans. He went by the name of Matt Fantastic. And there was Scott Rogers, and Steve Nix, Ali, my mom, Luke Laurie, Sarah and Travis Galloway, and all my fans. They were my guiding light when the road darkened. And it darkened, a bit.

I constantly harassed these people with hundreds of Facebook messages:

I had to learn what a publishing contract was. I needed to figure out what the normal payment was for royalties, an advance, which company had a good reputation, and which may not, who would give my baby all the love she deserves. I wanted my baby to be special! I wanted to be special. I wanted special treatment, because hell, I made a game! Somebody powder my nose and do my hair while my shoes are shined. My macchiato has soy milk in it, you know I don’t like soy milk.

For the record, every company that offered me a contract was amazing. It was overwhelming how accommodating they were. But I had a first-choice, and I was going to stick to that first choice, no matter what. AEG had a long history of world-building, with greats like L5R, Warlord, and Seventh Sea. So AEG was my first pick. But I was completely uncertain if I was AEG’s first pick.

I didn’t get a contract signed until 7 months after Gen Con. And it was in this time, that I completely and utterly fell apart.

I had to lean on my friends and industry contacts the most. I didn’t know if one company would drop me, lose interest, or if the other was secretly making a game just like mine, plotting my death, conspiring with aliens against me. There were so many crazy thoughts running through my head. I just couldn’t deal with it. It was crushing me. Honestly, I’m pretty sure they were conspiring with aliens. They sent the mailman to my door, and he didn’t smell right.

But I held fast. I trusted my product, and more importantly, I trusted the fans who, over 300+ playtests, all unanimously agreed it was the best game they’ve ever played. This faith did not come naturally, but was rather learned. Without a lot to go on, I learned to settle into faith in my product, and my design. Most importantly, I learned to have faith in myself. That I was a unique snowflake, that even in a sea of creatives, I could stand out, that I would stand out, that I am: good-enough. I learned to believe that no matter what, because there were people out there, and not just a few people, who loved the game, the game would get published, and I’d get a decent contract. Of this, I learned, to be sure.

The best advice I was given was from Luke Laurie, and Scott Rogers:
“The wait will kill you, so just start designing the next game and forget about Cutthroat.”

Forget about Cutthroat? Seriously??? I couldn’t! My life is on the line! I blew all of my savings on this journey. How could I just forget that everything is on the line? It’s not that easy! I’m going to be eating out of a trashcan and then the rats really will eat the squishy parts of my eyes.

But I did. I forgot about the game and started in on the next one. I worked a stressful full-time job in software development and tirelessly came home and grinded out a new game. 14 hours of work a day. That same hustle and grind spirit that got me here came in handy at a time like this, when I was almost completely debilitated by fear and uncertainty.

And when I wasn’t designing the new game, I was planning ‘The King’s Tournament’ at Kublacon, a special event for the fans of Cutthroat Kingdoms, an event that completely floored me, drawing close to 50 people and filling my entire allotted space in the Tournament room. This event wasn’t necessary, and it came at a very heavy cost of my time and sanity, but I was determined that even if all the publishers dropped me, and I never got a contract, I would Kickstart the game myself and make sure it saw the light of day. In essence, I couldn’t stop working, I bled passion out of ever pore.

The plan was simple: I never stopped designing, pouring every ounce of blood that pumped through my heart into the new game, the same blood and passion I gave to Cutthroat. And I swear to God in the heavens you wouldn’t believe what happened.

I went to BGG Con on a whim and ran around like a crazed duck showing a few publishers the very early skeleton of the new game. I forced myself to focus on the new game, and the new game only while I waited. And they bought it.

You read that right.

AEG bought my second game, and they bought my first game. I mean… are you serious?! You can’t be serious. I’m sitting here in diapers crapping myself, and you’re picking up my second game too? I must have eaten one too many magic mushrooms in Menzoberranzan the last time I was fighting the Drow Spiderqueen. Did they not see me behind my computer crying to the internet night after night, terrified I’d be forgotten, I’d be dropped, I’d walk away with nothing?

Distraction was the only way I got through the heart-rending uncertainty of waiting for a contract. And distraction was the most rewarding advice I was given. So if you’re waiting on a contract, and going out of your mind with happiness, fear, joy, terror (in that order), please remember: believe to the very core of you that you are a winner, and start designing your next game. Because you may well get that one signed too.

And here I am, a year later, at Gen Con, at a private table, in a private room in the oldest restaurant in Indiana, sharing some world-famous, nose-blowing cocktail sauce with a host of the biggest blockbuster designers in the industry: Senji Kanai, Paul Peterson, John Clair, Ryan Miller, Tom Cleaver, and more…

How I ended up here, I’ll have to reserve for another day. That is a tale all of its own. 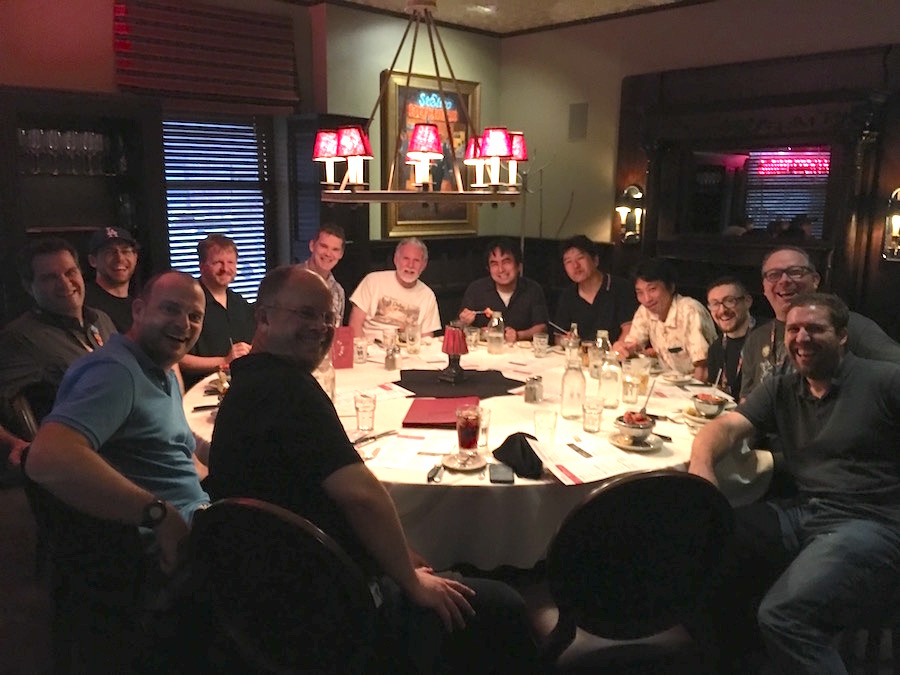