Bryan IDW Kickstarter Protospiel rayguns rocketships serendipity Unpub by Guest Author | on May 3, 2017 | 0 comments | in Kickstarter | Like it

Introduction by Luke Laurie
Our regular readers may remember a feature in which guest author Bryan Merlonghi described his experience entering the tabletop game industry through playtesting events and his first trip to Gencon to pitch his first game: “ Cutthroat Kingdoms Goes to Gen Con” and his follow-up about getting that game signed, Cutthroat Kingdoms Part II: Landing a Contract .

Well, Bryan has come far since then, and is most definitely “in the industry” – now working as the Marketing Manager for IDW Games. In this piece, Bryan returns to describe some aspects of Scott Rogers’ new game: Rayguns and Rocketships.” which is on Kickstarter now.

“What are we even doing here?” I said to Ali, with a distressed look on my face. “I don’t know a single person in here.”

Ali turned, patted me on the shoulder, put her hand over my heart and said, “You’re here because of this, and this is what is going to be what everyone gets to know.” And with a shaking hand, I opened the door to Game Kastle in San Jose, CA.

There I was at my very first UnPub (a small convention for unpublished game designers to hang out, and play one another’s prototypes). One of the first faces I saw was slightly shadowed by a fedora, and I knew, in that moment, that this guy was worth getting to know. I don’t know what it was, maybe his loud jovial laugh, maybe the cool-cat air about him, or maybe even still, the incredibly eye-catching game he had at his table. This guy was Scott Rogers, and at the table, was Rayguns and Rocketships.

What I will explain now, still, to this day, sends a chill up my spine. It is one of the most eerie things I may have ever experienced in my life.

I looked down at the beautiful dual-scale game, with a star map, and multiple ship interior boards, and I saw the incredible prototype miniatures, and I knew I wanted to help this guy. At the time, I was a professional miniature painter, and so I lean over, put my hand on Scott’s shoulder and say,

“I’m going to help you get this game sold.”

And you know what? I had no idea how I was actually going to do that, at the time. I knew absolutely nobody in the industry, I was just some guy teaching painting classes at some local stores, painting in my tiny 200 square foot studio. “Scott,” I said, “I’m going to do everything I can to see you successful.”

Now what still puts a chill down my spine is the fact that I am here, now, 4 years later, as the Marketing Manager for IDW Games, directly responsible for the success of Scott Rogers’ Rayguns and Rocketships Kickstarter campaign. If that doesn’t show you that anything is possible, I don’t know what will. Remember: even if it’s not there in front of you, even if you can’t see HOW you are going to get to where you want to go, you can get to where you want to go. And you may end up helping that guy you met 4 years ago and make good on a promise you had no idea how you were going to make good on.

Scott, I’m making good on my promise. This one’s for you!

The first thing that caught my eye when I saw designer Scott Rogers showing off Rayguns and Rocketships (with a gleam in his eye, mind you) at UnPub San Jose was the fact that it had multiple boards with action going on simultaneously between the two. It was incredible to watch. In seconds I was having a fantasy that this was FTL the boardgame. And in a way, it very much is, without the added complexity or punishing difficulty.

A lot of what I saw that lit me up about Rayguns was the back and forth between the star map, and the ship boards. I watched as players pre-programmed their rocketships, and then took turns moving their crew members around their ships, timing boarding actions as their ships passed one another through space in precise moments. What a trip to watch!

After watching for a few turns, I had to play. No more than five minutes into the game, not only was I impacting how my ship operated on the star map due to my crew placement on the ship board, but I was also setting myself up for daring boarding missions as my spaceship passed an opponent’s spaceship mid-flight. 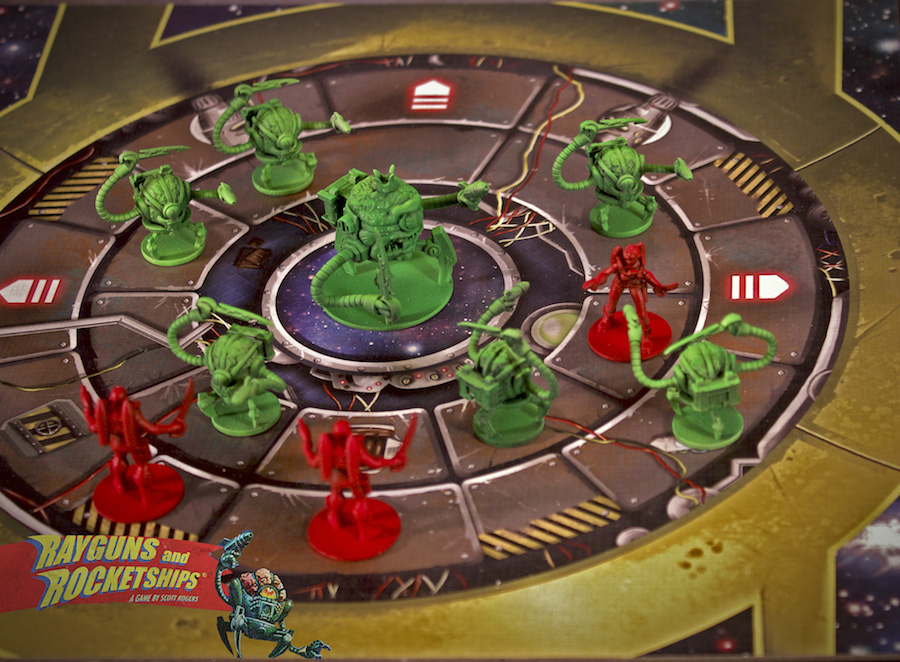 Scuttling a few of my precious crew aboard an opponent’s ship proved to be a huge choice. I was sacrificing potential crew to man rayguns (thereby increasing their accuracy), and crew to operate the engines (increasing my ship’s speed) or to stay and defend in case of an enemy incursion, but I felt it was worth it to send them into an opposing player’s ship to sabotage their engines. 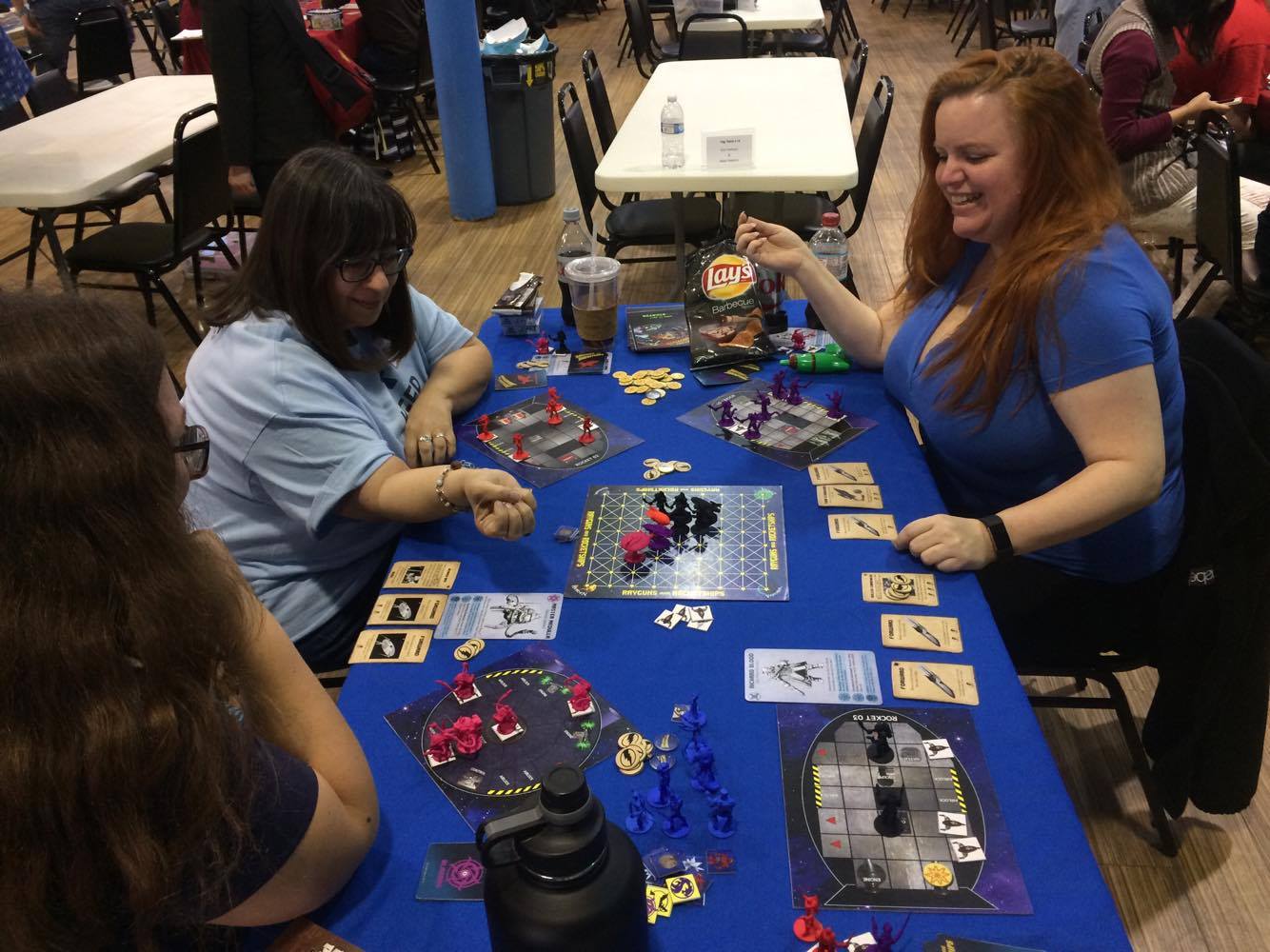 That was what really got me. How successful am I at blasting an enemy ship apart with my rayguns from a distance? Could I send a few crew aboard their vessel to distract them while I continue the barrage from afar? What if another player sees that I’m low on crew, and decides to board me instead? The back-and-forth between these types of decisions heightened the experience to a wonderful level.

The duality of the scale is not an added benefit, it’s a necessity. In the days we live in now, where everyone is making miniatures games, doing something innovative is truly an oversight. IDW Games has certainly seen the beauty in something so cool as having a dual-scale system, and we’re leveraging that as much as we can to give the public a truly unique experience, set in a rich and colorful world.

That’s what I got, when I played Rayguns and Rocketships for the first time. This experience was, without any doubt, a novel and fortunate new type of game.

Rayguns and Rocketships is on Kickstarter now!