Going Back to GenCon

8 years ago, my newlywed wife, Melissa, surprised me with a trip to GenCon for my birthday. It was a truly amazing gift. 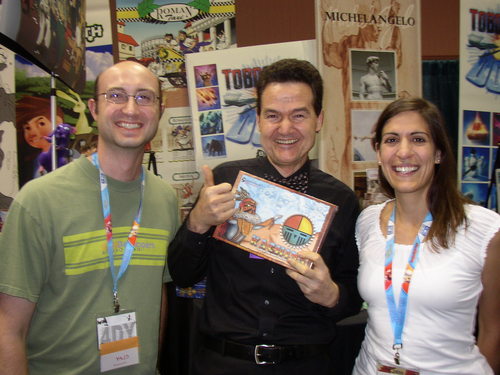 My first published game, Kachina, was being released at GenCon by Bucephalus Games. Our honeymoon had been only a month earlier, so the GenCon trip was like an extension of our honeymoon. Melissa loves to game as much as I do, so we loved demoing and trying many new games.

Plus, there were many wackly moments that still stick with us. Like when a crowd of gamers literally cheered like they were at a rock concert when the Mayfair workers lifted up a deluxe Catan game as the prize for a raffle. Like when the Wits n’ Wagers game show organizers kept on singing “These are a few of our favorite things…” even as fire alarms were blaring and crowds of people were exiting the convention center. Like when I caught famed game designer, Reiner Knizia, buying a copy of my game! No joke. 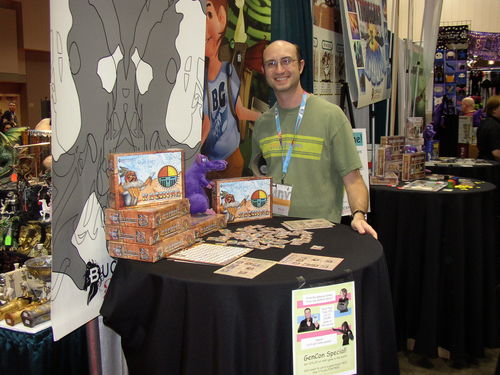 Now, after 8 years, I am returning to GenCon, this time with my wife and six-year old son who also loves to game. This time I am going to the convention to promote Whistle Stop, being released by Bezier Games, and I am also bringing several prototypes to pitch to publishers, one of which I am doing in double time, but more on that in a future post.

To say I am excited is an understatement, but I am in awe at how much has changed in the board game industry in those 8 years.

According to its own numbers, GenCon has grown in attendance from 27,900 to 60,819 unique attendees, a staggering 218% increase!

Back in 2009, the Kickstarter craze for board games had not started yet. Alien Frontiers had not been released. There was no Stonemaier Games. The iOS versions of popular board games had not been released yet. Dominion was still rolling out in 2009, so the deck-building mania was in its infancy. Pandemic was still a new game, so cooperative games were a new trend. There was no Kennerspiel de Jahres (that started in 2011). BoardGameGeek also grew up during this time, likely doubling its number of users.

The Dice Tower was still being run out of South Korea in 2009!

From a game designer point of you, all of this increase in publishers and released games means there has also been an increase in the number of game designers trying to get prototypes published. In 2009, I believe there was only one Protospiel event in all of the US. Now there is a Protospiel-like event at every major convention and several stand-alone Protospiels all around the country. There are more resources, places like the League of Gamemakers, but many others too such as Cardboard Edison and Gamecrafter. I am excited by all of this increase in board game energy, but it’s also sobering to know how competitive it’s become to even get a meeting with a publisher. Even if one gets a game published, there are so many games being published, it’s harder to get noticed and punch through all of the noise.

So, what are my goals for my return trip to GenCon?

Are you going to GenCon? What are your plans? The League of Gamemakers wants to know.