I’m still constantly amazed at how much designs can be improved by removing things, rather than adding things. I’ve had another lesson in minimalism during my design of Ars Victor: Tour of Duty.

What is Ars Victor: Tour of Duty?

From the beginning, I’ve had a number of expansions planned for Ars Victor. One of those ideas is Ars Victor: Tour of Duty. Because a single game of Ars Victor can be played in less than an hour, the notion was to create a ‘campaign game’ expansion that let multiple people play multiple interrelated games.

The focus of this expansion was not to add additional content to the battlefield, but to create a context within which Ars Victor could be played. It’s sort of the tabletop equivalent to the “Total War” series of computer games: you have a strategic game where you’re mustering your armies, and a tactical game where you slug it out in the mud. 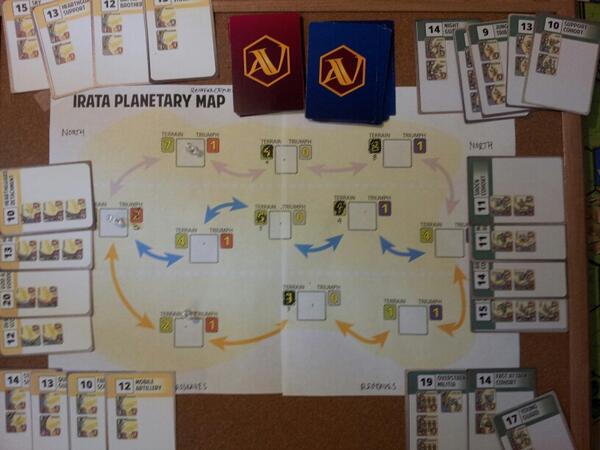 My initial pass at the design involved a deck of cards and a map. The idea was that two sides would fight back and forth over a contested front, and eventually triumph by taking the enemy capital. The cards represented fixed allocations of units that got distributed amongst multiple players on the same team. The location of the battle on the strategic map influenced the board setup towards terrain-heavy or terrain-light.

First Tests: Could Be Better

This worked fairly well in playtest, but a few things jumped out at me: 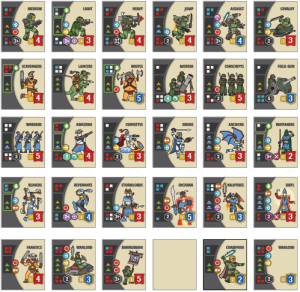 Ars Victor has a huge amount of player choice in game setup. Unlike other games of its ilk, it doesn’t limit you to fixed-army scenarios (Command & Colors, Memoir 44), or fixed map setups (Battlelore). It gives you vastly more options in army builds, map setups, and overall strategy. It’s similar to Warhammer 40k in that sense — you have complete control over your army composition, which then dictates how you set up the map, and how you play.

As you get more experienced, you start to learn what are “good” army builds and what are “bad” army builds. Regardless of your overall strategy, there are certain laws that almost always hold true: having skirmish units is important, you need units that can throw blue dice, your HQ should be survivable and mobile, etc. You can see what players are building and what they’re talking about at our on-line Army Builder.

The initial tests of Ars Victor: Tour of Duty showed that being forced to play “bad” builds was actually fun! The best battles in the Tour of Duty games were the ones where both players were stuck with sub-optimal forces in less-than-ideal conditions. Both players were forced to improvise strategically and tactically. You saw matchups that you would never see in a “normal” game. In short, it was a hoot.

So I started to explore that more, and realized what I really needed to build was a random scenario generator. The fun comes from the interactive choices in building the scenario, and then playing a game of Ars Victor that you’d never normally choose to play. That’s context.

The new version of Tour of Duty is far simpler, and far more interesting. In it’s simplest form, two players are just pulling cards from three different decks and using some of them to dictate battle setup. Each deck is used in a certain way, and each deck affects game setup and scoring in a different way:

Objective Cards are dealt out face-up, one per battle. They set the stage for the scenario in a few minor ways:

A limited number of these are drawn by a team’s overall commander, who plays them face-up on a battlefield when they assign a player to that battlefield. They are specific to one side, and they alter the game setup and introduce Special Objectives.

A number of these are drawn by the team commander, who hands them out secretly when they assign a player to a battlefield. The cards stay with that player until any of the units that they provide fall in battle. The commander then gets to draw replacement cards and hand them out for the next battles.

The map is gone. Instead you have a War Will for each team; the starting value can vary based on how many players and how long of a campaign you want. It’s completely flexible as to how many players you have involved, Because War Will is the only thing you really have to track, it would even work as an extended event, with multiple games played by dozens of players over the course of weeks.

The new version is much cleaner, and exemplifies the “less is more” notion in a couple of ways:

And once again, I am reminded of this quote:

Have you found that removing or streamlining things in your designs has made them better? Are there titles out there that you think would be better off if they had less? (I’m looking at you, Battlestar Galactica)