“Ask the League” Are 2 player only games economically viable?

2 player ask the league board games CCG economic viability game design LCG Magic: The Gathering Publishing by Norv Brooks | on April 24, 2015 | 5 comments | in Feature | Like it

See what the members of the league say regarding design and publishing of these titles and share your own thoughts below in the comments!

Before we found other gamers, that’s pretty much ALL we would buy! I’ll also add
that now that we attend meetup groups, we don’t tend to buy big group games, either, because it’s just easier to play a game someone else has along with them. I think two player games definitely have a strong casual audience with couples/roomies looking for a nice way to spend time together. But reaching that audience is definitely different and requires some smart planning.

Sure… Magic the Gathering. Next question! Seriously though, even though I don’t like 2
player only games much for issues that Tom mentions and generally find that 3 players creates a more interesting dynamic … 2 player games fit convention spaces, public play tests with strangers and FLGS stores well. ­ It’s quick and easy to just grab 1 person. It’s less downtime and awkward to start a game. I don’t see any reason why 2 player only games are any less viable than big group games. In fact, more people probably buy them since in a group game, only 1 of 9 may need to own it.

EDIT: My above reply was before I turned more completely to publishing over design tasks. At this time, I would not seek to publish a 2 player ONLY game. Why? I’ll agree with all the replies here that there are great companies doing this and serving a need, but I don’t think a small indie should isolate the potential audiences they need to grow. I’ll cite a topical example – I saw Urosette at a recent publisher/designer speed dating event at GAMA Trade show – it’s an abstract strategy game designed by Eliot Hochberg. A HUGE selling point for me was that it wasn’t just 2 players, but expanded to 4. To me, my answer is still that 2 player only can be economically viable, but not as much as games that allow for 2 and more.

Two player games are very economical. They’re usually tighter in mechanics and design, cheaper than most games, and easier to get out and play. For people like myself who live with a partner who plays games as well, they hit the table as often as any game. In fact, from my perspective, the question should be, “are games that are 3 or more players economically viable”. I have a big stack of them we haven’t cracked open yet because of the inconvenience of getting a third party to learn a new game versus play one of the many we already know.

Yes. I’d say the evidence for this is overwhelming. Of course CCG’s make up a huge fraction of the market for tabletop games. One of the most commercially successful games of all­ time, Magic, the Gathering, is a two player game. But there are also scores of “LCG” -type games that have all the properties of collectible card games, without the whole collectible part. I think there is also a market for two-player war games, two-player abstract games, but I also think a well-crafted 2-player Euro could do quite well. There are a whole lot of folks out there who have a special friend or life partner who they game with most often, and they’d always consider picking up a game that fit their style.

If you ever have had or plan to have a relationship with a person where the two of you would like to play games, you know two-player games are valuable. No one would argue that. But I think to fully cover this topic, we need to compare the idea of two player ONLY to games that can be played by two players. While there are games that scale well, in my playing experience, most games designed for more players that scale down to two, leave the two player option feeling like you’re missing something. A game designed specifically for only two players is complete and gives a full experience to those two players because they were wholly considered in the design. Judging whether or not these games are economically viable is up to publishers and market research. But, answering as a married gamer, I know I buy games that we can play together and love it when a game is complete without needing a third or fourth player.

Yes. I personally own Agricola All Creatures Big and Small, Revolver, Tally Ho! and Rat Hot, all great two-player only games, and I would like to get copies of Balloon Cup, Star Realms and Patchwork. Kosmos has specialized in a line of 2-player games which have proven to be very popular. White Goblin Games also has a line of 2-player games. So, you may not have as many places to submit your 2-player only game, but there is obviously a market out there for these type of games. Generally, it seems like 2-player games fall into two types: an attacking game for two guys (Magic, Star Realms, Netrunner, Revolver) and a puzzle/card/euro game for a couple (Lost Cities, Agricola All Creatures Big and Small, and Patchwork). Of course, there are always exceptions to those stereotypes, but it’s a good idea to playtest your 2-player game with the right target audience. 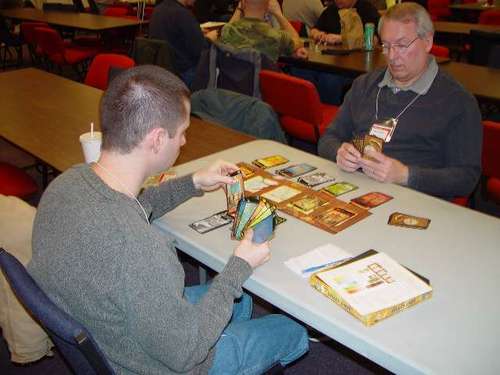 I would agree with most of the comments. I think to an extent 2-player only games are economically viable. But really the comments speak to something else. That is that games that can be played with 2 players are in demand. My point of view is, as a publisher, I would like my game to be as accessible as possible without damaging the integrity of the game. So I will try to publish games that scale easily from 2 to 5 players. However, I would still rather have a 2-player only game in my catalog than a 3-or-greater player game in my catalog, because I think the majority of games are still played with 2 players. That is changing but you still have a lot of couples/roommates/really good friends that are at home playing 2-player (not necessarily only) games.

The question here is the economic viability of Two Player Only games. Getting actual sales figures on games seem to be a case of well guarded secrets. So, my thoughts are based on a few bits of data from a BGG Top 50 Board Games in number of Sales – April 2013 list which is based on participants providing data on their individual purchases. Therefore, it’s an estimate – hopefully a good estimate. Of the top 50 games on the list, 5 were Two Player Only games – a respectful 10%. Let’s look at some additional data from this list about one specific game Android: Netrunner.

Norv is either blessed or cursed with the relentless drive to turn any and all experiences into a board game. Two visits to Hawaii and a story has to be told of its discovery and growth to the 50th State in a game titled “Aloha – the Spirit of Hawaii”. The 24/7 Breaking News coverage of the Boston Marathon becomes the current game looking for a publisher “Breaking News – Through the Generations”.