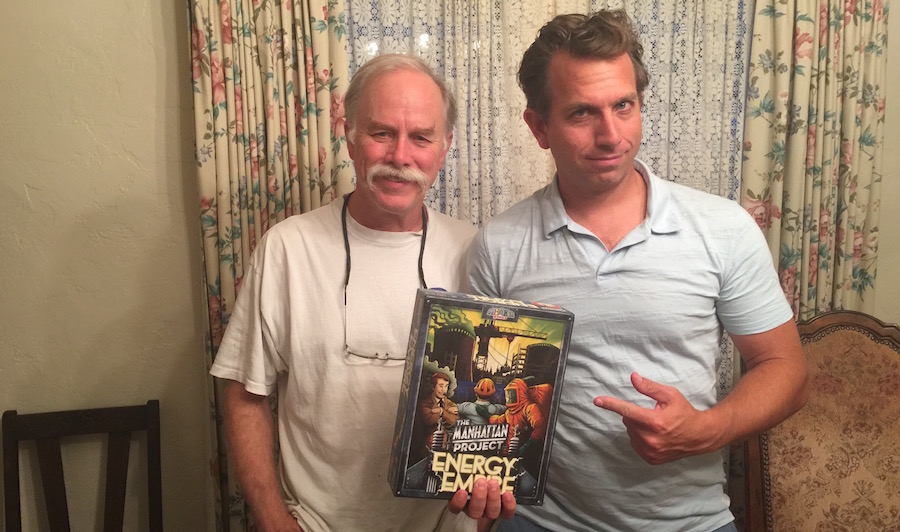 I like to play all kinds of games: party games, strategy games, family games, card games, etc. But that doesn’t make me good at designing all different types of games. For my first few years experimenting with design, I took a stab at building games in nearly every genre and a multitude of themes, before I found the types of game I build best. I seem to have a knack for building medium-heavy euro-esque strategy games, often with some variation on worker placement, resource management, and engine building. As it turns out, these are also the games that I’m most likely to seek out to play. As a player, my tastes have gravitated towards those deep strategic experiences that still play out in a reasonable length of time. As a designer, I find working on those types of games to be something I can sustain with gusto. 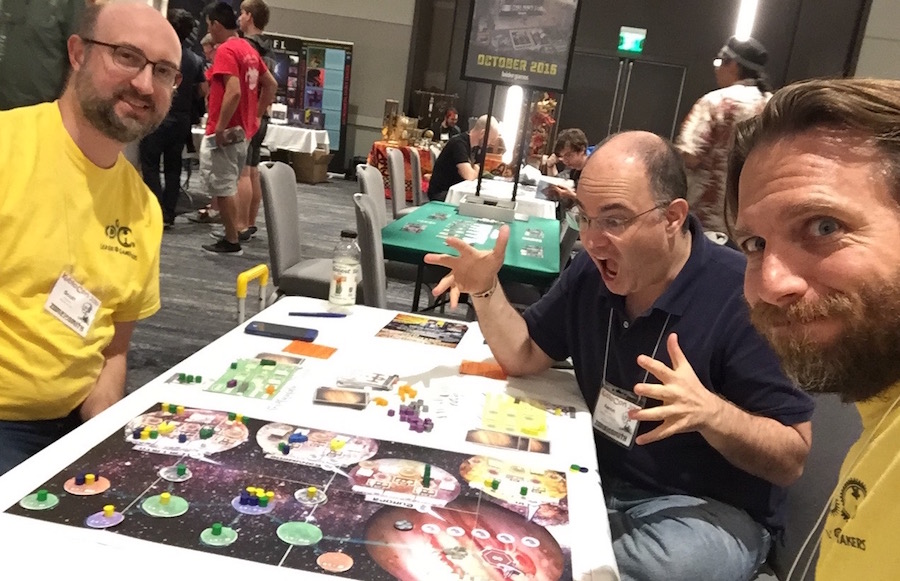 Early on, I figured out that I just want to design games. I don’t want to be a publisher. I’m not seeking employment in the industry. And I most certainly don’t want to run crowdfunding campaigns to self-publish. You need to know what role you want to play in the field. If you don’t commit to something specific, you may find yourself trying to do everything, then struggling to make it happen, and struggling to do it well.

3)There is a lot of competition out there

This is the golden age of tabletop games, and it’s not going to slow down any time soon. Many, many new designers are finding their way into the field, attending events, pitching games to publishers or attempting to self-publish. There is no shortage of good designs, novel ideas, and creative twists on old concepts. All of these creative people are out there promoting their work, competing for attention from customers and prospective publishers. A design that might have been good enough and unique enough to be published five years ago might not stand a chance today. A game might be good enough to publish, but not good enough to be distinguished from the crowd. It can’t just be good. It needs to be better. To be a successful designer, you need to play a lot of games to know what’s on the market and what the trends are, and then seek ways to innovate beyond what’s already been done. 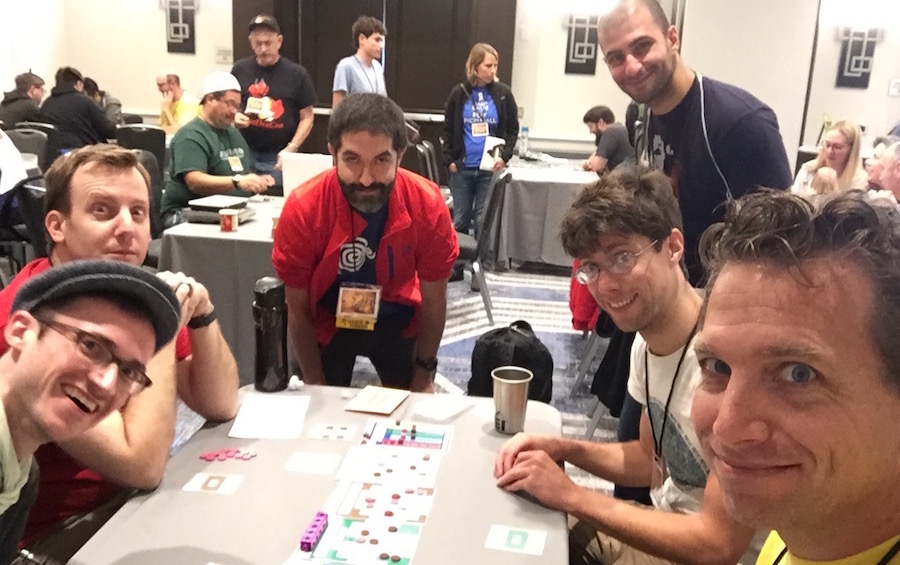 All this competition doesn’t mean you should be designing alone in a cave for fear that others are going to steal your design. As a community, we thrive on mutualism. You need to get out there to events and get to know other designers and publishers. Learn from them. Playtest their games. Get to know what other things are going on within the community. Make some friends. There are countless benefits you will receive by helping others and designing in public. So go to design meetups, Protospiels, and conventions, and be a part of the community working to make the next generation of great games. It’s a great community. I’ll see you there.

I’ve been designing games for about five years. I have two published games. Only two! One is Stones of Fate, which sold about 1500 copies and has not been reprinted. The other is The Manhattan Project: Energy Empire, which I co-designed with Tom Jolly. I do have other irons in the fire, several games that are likely to be published, but these will take time too. But I’ve also designed many games will likely never see light of day. Dozens. How many games have reached that “very good” level? Dozens. Am I getting faster? Yes, my last design took only ten months from concept to submission to a publisher, and this is a big game. Great designs take time, and appreciating that and embracing that can take away the sense of urgency. You need to have some zen about the process, and be accepting that time spent designing is time well spent, regardless of the outcome.

6)You can sign with a publisher, and still have significant influence

Some people go straight to self-publishing because they fear that a publisher will ruin their precious design. They’re not willing to give up control. My experiences with Cosmic Wombat Games and Minion Games taught me that with the right conditions, you can work with a publisher and significantly influence the finished product. Ultimately, you and the publisher are seeking to do the same thing: to create a game that will be the best it can be. Usually, everybody is trying to make some money too, so being efficient with the components and other aspects of production is also in everyone’s best interest. With Energy Empire, we had a good game from the start, but there were a lot of little details about the game that the publisher thought could be eliminated or improved. We were able to work with Minion and go back and forth with testing and adjustments for several months. The balance of the game became very finely tuned, and now the game has many viable paths to victory and varies greatly from play to play. We had a hand in nearly every little change to the game. 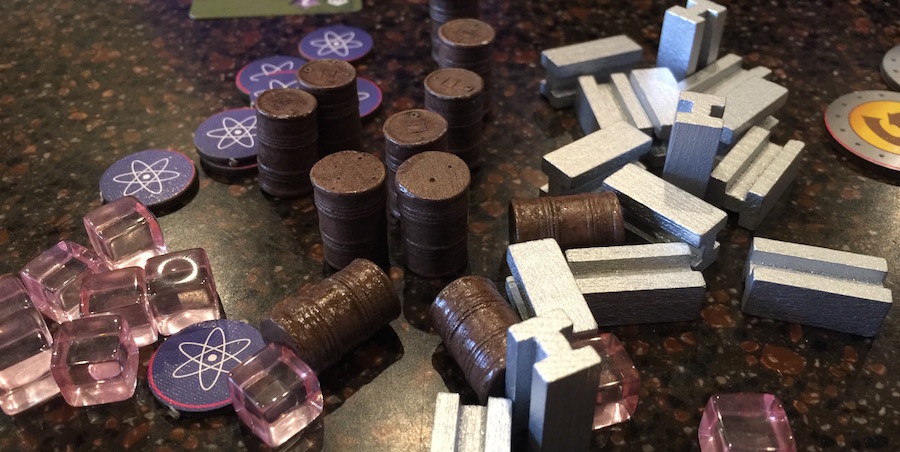 This one might be counter to what you have heard elsewhere. There’s a lot of emphasis these days on trying to get leaner, more elegant designs, and cost-efficient products that will fit in a tiny box and retail for $20. I get that. I aim for efficiency in all of my designs. Sometimes, unfortunately, low cost games skimp on components to the point of detracting from gameplay. More components isn’t always best, and isn’t always sensible, but the right components can really make a game more playable and less taxing on the players, by reducing unnecessary work. I’ve stopped trying so hard to reduce the component count of my games. After all, I tend to build big games, and many big games have many variables and mechanisms. Those mechanisms require components. I’ve found that having components specific to each function of the game helps the overall flow and comprehension of the complex interconnected game systems.

My best work has been done through collaboration. Now, I’ve never had that magical connection with a collaborator where we could see eye-to-eye on all aspects of a design, but I have found that working with someone with similar interests who is also critical of my work will make my work better. Tom Jolly and I have completed two successful projects together: “The Manhattan Project: Energy Empire”, which is shipping as we speak, and an upcoming game: “Beyond Jupiter.” These projects thrived because Tom and I would get together and duel, one on one, playing these designs over and over and picking apart what worked and what didn’t, seeking out every possible way to break the game. He and I are both mechanics-heavy designers. We’re story tellers too, but we approach our work like we’re creating a sophisticated machine.  I’ve got some new projects brewing with some other collaborators too…

9)Have a regular playtesting group

Until recently, for the last couple of years, I’ve maintained a solid, regular “development team,” that would meet and playtest my work every week or two. This team is incredible. The players are not all designers. They have somewhat different playing styles, but otherwise, they are the target audience for the medium-heavy strategy games I like to make. They stick with me through good playtests and bad ones. They play games that might never see light of day. Their input has really helped elevate my work to a level that wouldn’t be possible alone.  Keeping the same steady group allowed us to delve very deeply into the finer nuances and fringe circumstances in the games. Unfortunately some of my group has moved or had other life changes, so I’ll need to build a new group soon. 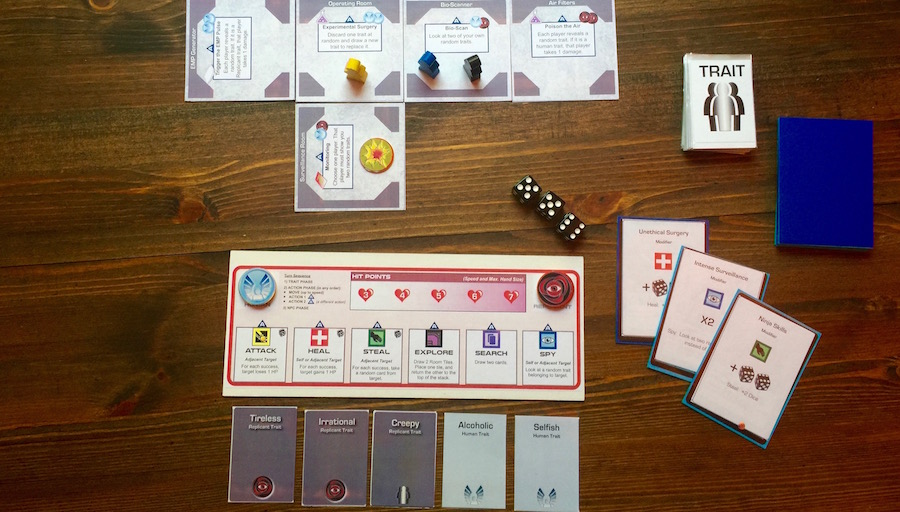 10)Failure is the norm

Most of my work will not be published. Honestly, most of my work isn’t very good. Frequently, I take good designs and rebuild them and make them worse. But that’s how art works. That’s how science works. We take what we know, we experiment, we fail. We learn. We get up, we try again. I keep at it because I love the act of creation. I love the thinking, the problem solving, the imaginative exploration. I don’t quit because I love what I’m doing, and I know:

The best games are yet to be made.