Gettin’ Figgy With It: Boston Festival of Indie Games 2016

We can demo Rocket Cats in Space about eight times in one hour. Eight demos an hour, four people per demo, for eight hours. By the end of the day, my feet were sore, I couldn’t talk above a whisper (even with my handy Emergency Throat Lozenges), and the idea of ever standing up again was wholly unappealing. But I was elated. Why? Because somewhere in the neighborhood of 200 people tried our game, with many times over that number of people watching, and others straining to see over those gathered around the booth. It was the Boston Festival of Indie Games, or BFIG.

We spent a whirlwind 36 hours in Boston – and about a quarter of the time screaming, “FIVE ROCKET CAT, FOUR ROCKET CAT, THREE ROCKET CAT…” at the top of our lungs as players drummed on the table with us or flicked their pieces around the board. We, like Kelsey at last year’s BFIG, were really feeling the indie board game community spirit.

What Is the Boston Festival of Indie Games?

For five years running, indie gamemakers in the digital and tabletop spaces have gathered at MIT’s Johnson Athletics Center to celebrate local (or, in our case, not so local) independent games and makers. Held on September 10, 2016, nearly 50 tabletop games and just as many digital games were showcased to the public. During the day, festival-goers explore the games, voting for their favorites to win the coveted Audience Choice award at the Figgies – BFIG’s own award ceremony. In the evening, everyone comes together for one last hurrah at the Figgies, to find out who won various awards (this year, nearly 20 were given out!) in fun categories like Most Dynamic Game and Best Family-Friendly Game. 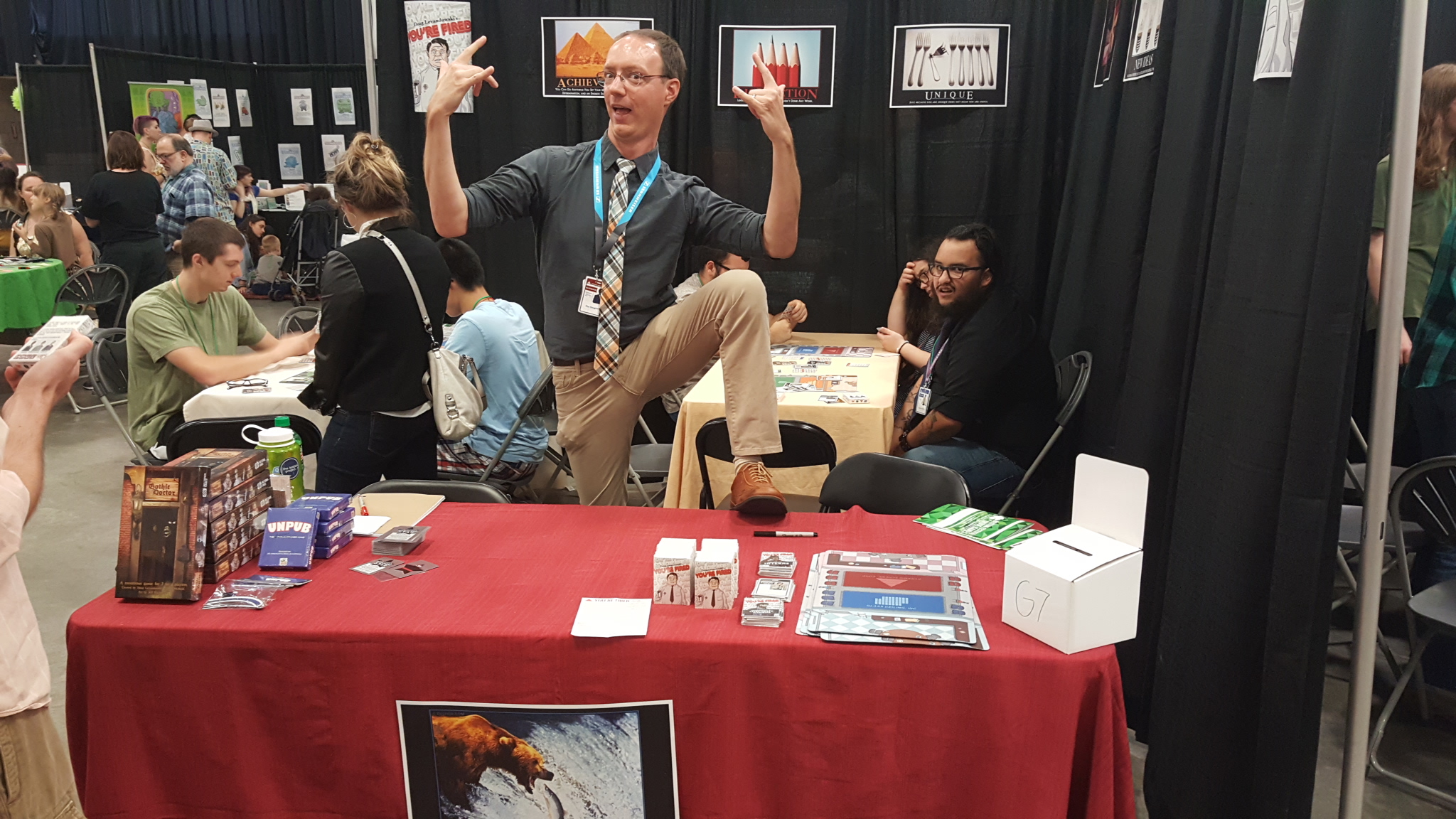 What Are You Doing Here, Jasmine?

I live in Pittsburgh, and have no reason to go to Boston, right? Wrong! Last year, the Figgies came onto my radar after Kelsey Domeny’s game, Four Omens of the Tu’i Tonga, was showcased. Her seriously amazing booth decor captured my imagination and I was hooked. Applications for consideration were due in April, and I found out they extended the deadline for video submissions – and Pete just happens to be a fledgling video blogger. He made us this:

We submitted this alongside our wordy application and $25 fee and we were off to the races. We received video feedback, along with a notification that we’d advanced to the playtesting round, from the amazing Tim Blank, coordinator extraordinaire, now in his second year of organizing the tabletop showcase.

In early August, we found out: We were accepted into the showcase! Even though they received our terrible first prototype – made as part of a 6-hour game jam two years before – Rocket Cats in Space was in. We booked our flights, ordered a banner, and we were ready to go!

The Road to Boston

We knew our poster board-and-crayon prototype wasn’t going to cut it, so we printed out a few spare boards to bring (including a hilariously oversized “mistake” from Staples – look for “GIANT Rocket Cats In Space” at a con near you!). 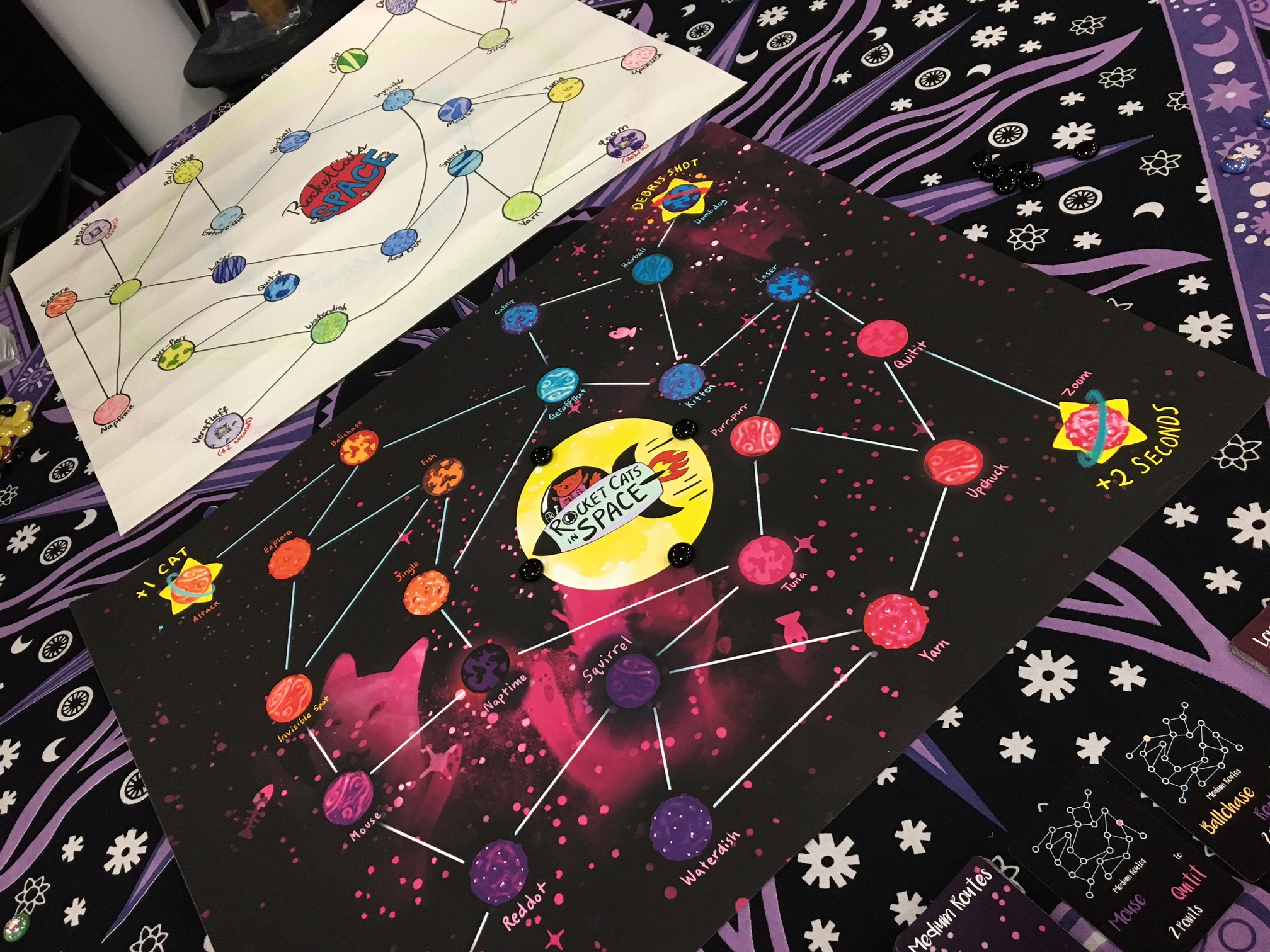 We also ordered what seemed like a ridiculously tall banner at 8 feet high, and provided our own table covering per the organizer’s instructions. We topped it all off with a soupcon of glittery stars. The perfect booth decor for folks who had to travel light. 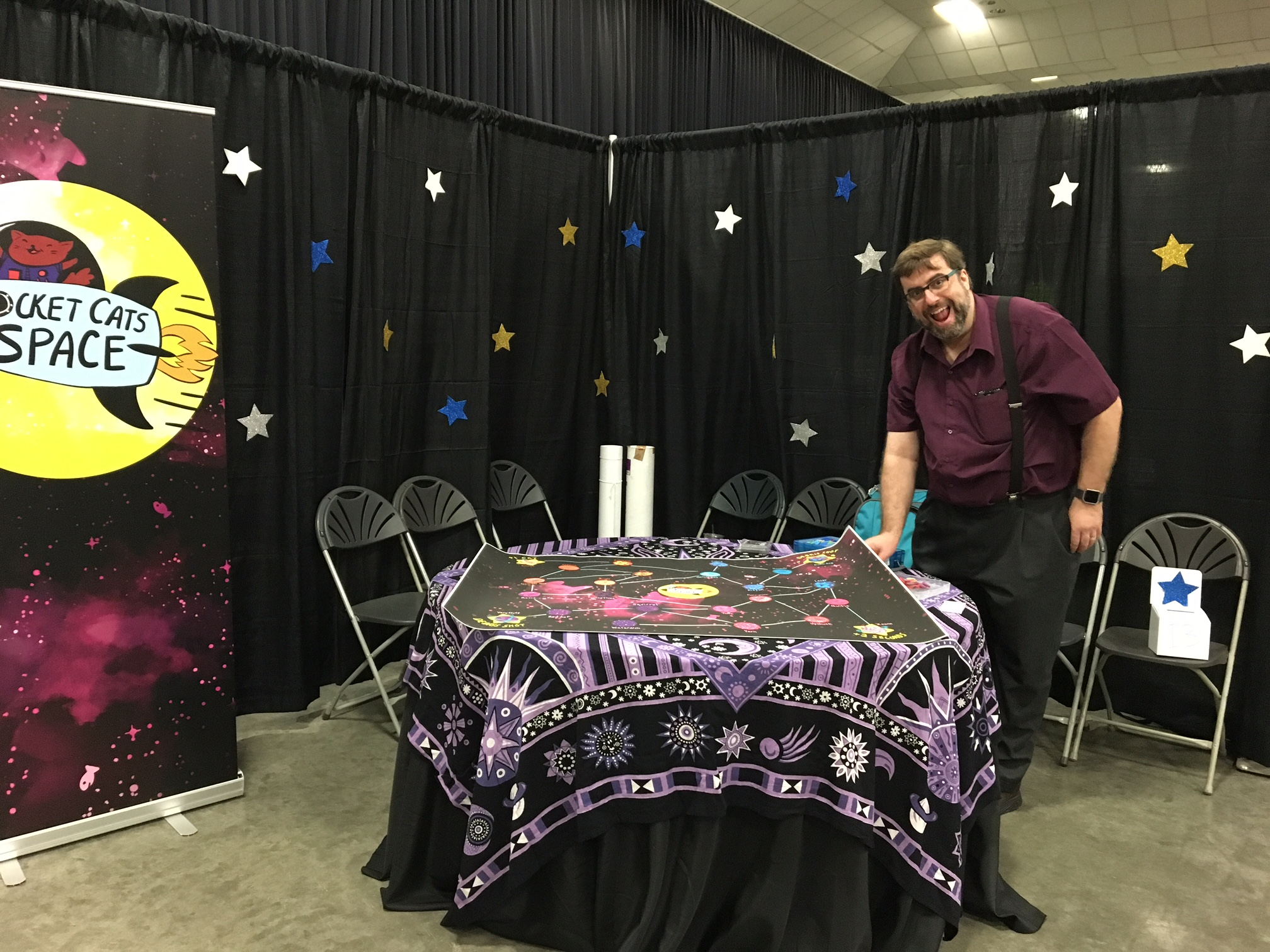 Our friend Jeffrey Norman Bourbeau did us the courtesy of setting up our booth the night before, and actually wound up as our surrogate game player at BFIG. Thoughts of all the cool games I wanted to play flew out of my mind somewhere around 9:30am, when our booth was swamped and it became apparent it wasn’t going to let up. I heard the same from others – if you want to get a ton of members of the public trying your game, BFIG is a great place for it!

Fortunately, Jeff reported back with pictures and stories of a few of his favorites: 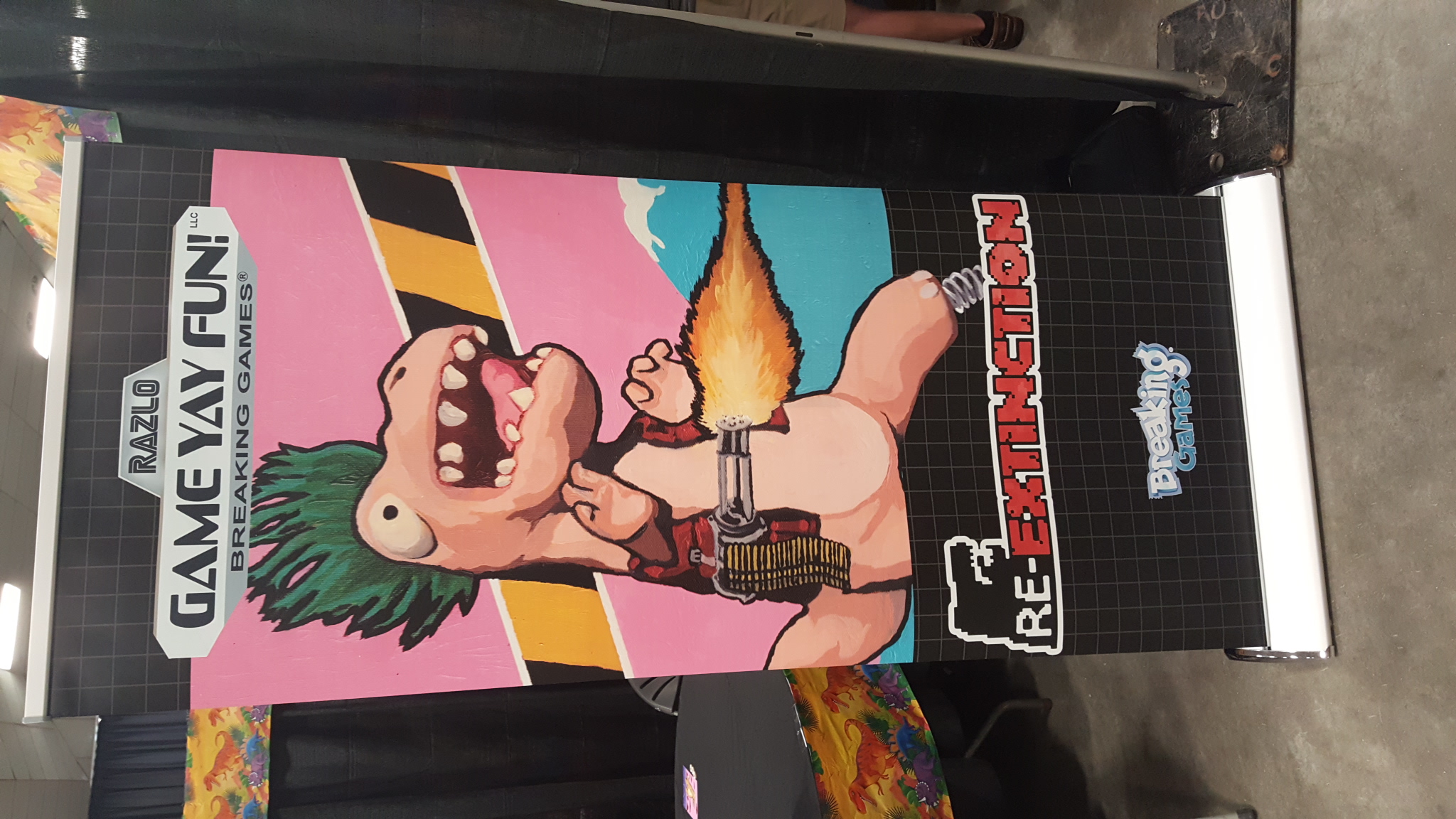 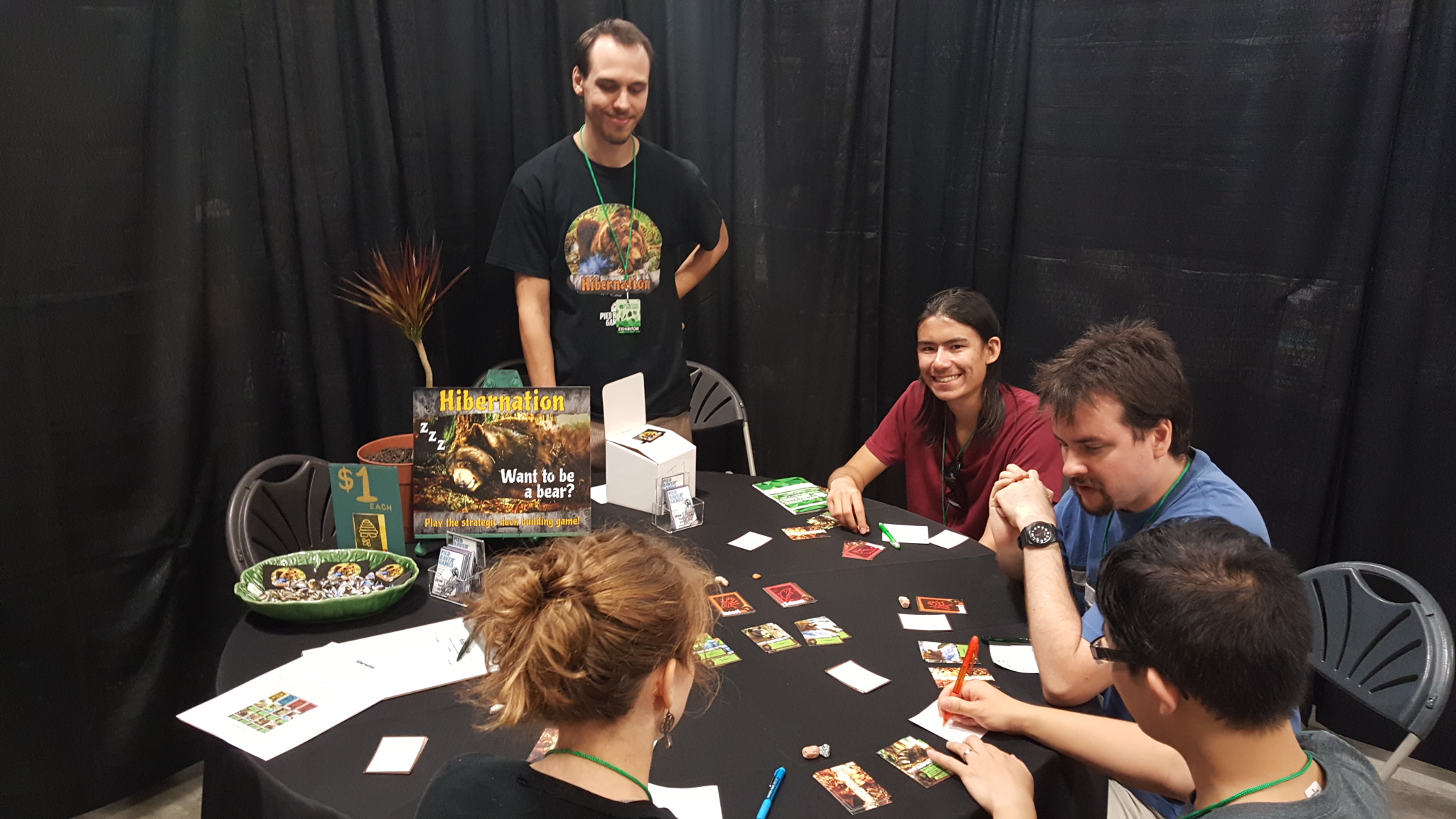 There were, in fact, so many amazing tabletop games that Jeff didn’t even make it up to the digital showcase – next year, perhaps?

Even though it just ended, I’m already excited about attending BFIG 2017 as a spectator. I can’t wait to check out the amazing self-published and unpublished games from a diverse and interesting set of creators, and talk to them about their games and inspiration. And if you happen to be in Boston in early September? Well, I hope to see you there, too!

Jasmine Davis is a writer and game designer in Pittsburgh, PA. You can find Jasmine’s own thoughts on her website, read her thoughts on other people’s games at Play Unplugged, or check out her latest designs at PlayPBJ.com. You can also follow her on Twitter – she’s @athingforjaz.