components game design mechanics by Teale Fristoe | on June 7, 2017 | 9 comments | in Designing | Like it

Randomness keeps games suspenseful while you’re playing them, and keeps them feeling fresh after repeat plays. Randomness is essential for many games. But there’s more than one way to include randomness in a game, and the way you include it can make a big difference for the play experience.

For a game I’m currently working on, I’m considering two common options to introduce some randomness: dice or cards. I’ve spent a good amount of time weighing the pros and cons of the two options, which I thought I’d share with you today. So, what exactly are the implications of using dice or cards for randomness? 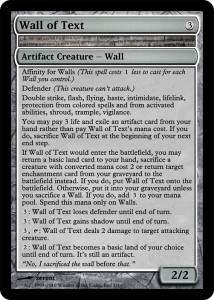 Cards are more flexible. You can print elaborate art on cards, or paragraphs of text if you so choose. Dice, not so much. Most dice can only handle one or at most two pieces of information on each face, and that information must be relatively simple, like a single number, letter, or icon. You usually can’t even have more than one color on a die face! At the end of the day, you can include much more information on cards, and you can make them much more attractive.

Cards allow for hidden information. Cards naturally have backs, which form a familiar and elegant way to hide information from some players. Dice provide inherently open information. You can include a shield so players can hide dice, but that’s less elegant and convenient and more expensive.

Dice are more expensive. In fact, dice, especially custom dice, are really expensive, while cards just seem to get cheaper and cheaper. Even print-on-demand cards, like those from Drive Thru Cards, are quite cheap. And that’s not even considering the cost of multiple dice, which cost more in terms of manufacturing and by adding weight for shipping. Ultimately, this is the publisher’s problem, but if you’re hoping to pitch a game to a publisher or self publish, it’s worth considering while you’re designing.

Dice have fixed probabilities. Dice have 6, 8, 10, 12, or 20 sides. There are a handful of additional options, but you’re going to have a tough time finding a 13 sided die. If you use dice, you’re going to have to work with the probabilities they provide you. Since there can be any number of cards in a deck, you have much more control over the game’s math if you’re using cards.

Decks of cards can change during a game. By this point, everyone is familiar with the deck builder genre, in which players modify a deck of cards by adding and removing cards over the course of a game. It’s such a fun and novel idea that the genre is basically saturated at this point, with countless games and variations. While dice can be added to and removed from a pool over the course of a game, individual dice cannot be modified (unless you’re using highly specialized, expensive components).

Cards are a pain to randomize. What’s the worst part of Dominion? For me, it’s waiting for another player to shuffle her deck in the middle of her turn. It feels like wasted time in its purest form. As a designer, you can try to minimize shuffles, or hide them at opportune times, but you can’t eliminate shuffles all together.

Contrast this with randomizing a die, which is an inherently tactile and fun experience. You feel the weight of the dice as you shake them. Maybe you blow on them, or shake them above your head for a moment, before you send them tumbling across the table. Everyone holds their breath as they wait for the dice to come to rest, revealing their final face. In other words, rolling dice is a spectacle, something that is exciting in and of itself.

Cards have memory. This is the big one. Once you reveal a card from a deck, you’re not going to reveal it again, unless you reshuffle the deck. Every die roll, on the other hand, is completely independent from every other die roll. That has many huge implications for gameplay.

First, it means that variance for dice is huge. It’s possible for one player to roll a 6 every time, and another player to roll a 1 every time. It may not seem likely, but it will happen now and then, and it will probably feel very unfair and unfun when it does. With cards, you have a lot more control, potentially limiting each player to a single 6 and a single 1 (or really whatever you want).

Second, it gives players something to reason about. In a recent article I discussed the importance of providing a puzzle for players, and an ever shifting deck of cards can easily fulfill that role. Thinking about what’s already been seen and the dynamic probabilities of seeing a particular card can be great fun for many people.

Third, over time decks of cards become less random as you work your way through them. This can eliminate some of the suspense that randomness can add to a game, which is especially problematic if a player figures out she has no chance of winning long before the game ends. This can also encourage card counting, which is often unfun and can give an unintended advantage to players with good memory and attention. Because of these issues, cards can sometimes fail to provide the randomness a game really needs.

As I’ve been thinking about all of this, I realize that cards (or possibly tokens in a bag, to minimize shuffle time and table space) fit what my game needs. The deck of cards provides randomness a bit like dice in Catan: players invest in different numbers (or icons in my game’s case) which pay off when the corresponding random element comes up. But unlike in Catan, when you could theoretically always roll snake eyes (or more likely never roll an eight), you’ll see every number as you progress through my game.

But that third issue with memory is a serious problem. I really don’t want players to know who will win until the game ends, and if you simply burn through a deck of cards, there’s a decent chance you’ll be able to figure out who will get paid off as the game approaches its ending. What I want is some predictability as you progress through the game, but the deck to sometimes get shuffled, which can’t be predicted.

So I’m planning on adding a die that controls how you work your way through the deck. Each turn, one player will roll the die, which will determine not only how many numbers pay out (in other words, how many cards to reveal), but also whether or not you should shuffle all of the previously revealed cards back into the deck and start fresh.

There are downsides to this approach. It includes both a die and cards (or tokens), increasing component cost. It might be too complex for the target audience. And it has the potential for the same issue as dice, namely that a number might just never show up. But I’m optimistic that the upsides will outweigh these issues. Of course, there’s only one way to find out. I hope to share good news after playtesting the idea!

That wraps up my thoughts on dice or cards. What do you think? Do you have a preference between the two? Are there any important differences between them I missed? Let me know in the comments!

Founder at Nothing Sacred Games
Teale Fristoe is the game designer that runs Nothing Sacred Games. He has self published Corporate America, Shadow Throne, and Birds of a Feather, as well as several digital games. His passion for games knows no bounds. When not playing, designing, studying, or writing about games, Teale can usually be found wandering around forests and mountains.